Character Is Formed in a Context Great than Self

Character is grounded in something bigger than self. As we flew across half of the globe it is hard not to appreciate the vastness of creation. Consider rulers like Alexander the Great who conquered massive portions of land but never had a view of the earth as we did from the plane flying over land and sea. Whether we view the earth from high above or the many stars and moon from below, we are reminded that there is a context greater than one’s self. And yet, in the vastness of creation God values mankind. Created in His image, He created us and the children of CCLS Uganda to make Himself known. Read Psalm 8 to get King David’s take on it.

Getting out and traveling is always a great reminder that there is a whole world bigger than one’s self…and bigger fish too. Check out the Nile Perch in the market! 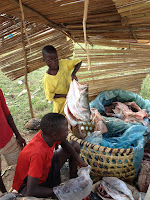